Pedal Pubs Could Be Coming to Sarasota 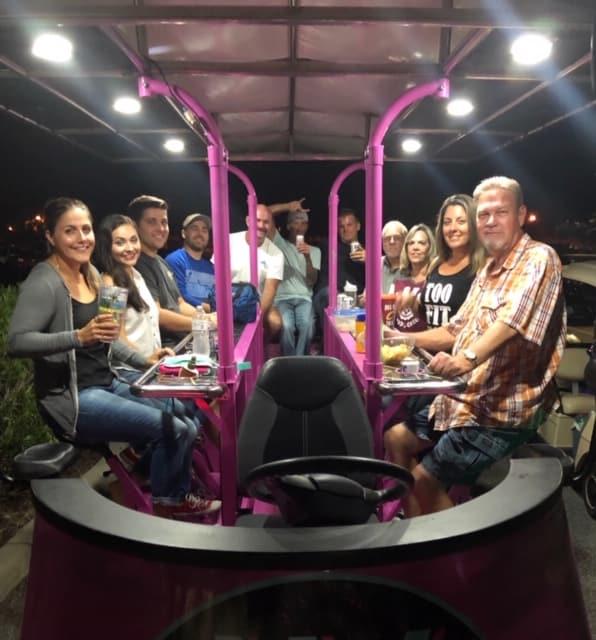 Pedal pubs could be coming to downtown Sarasota. At a recent city commission meeting, commissioners approved 3-2 a motion to begin drafting an ordinance to permit pub crawls on wheels downtown. Liz Alpert, Hagen Brody and Shelli Freeland-Eddie voted in favor of preparing an ordinance; once complete, it will go to a public hearing.

Pedal pubs are multi-passenger vehicles, or megacycles, powered by the pedaling of the people riding them. Beer and wine are allowed on board, but hard liquor is prohibited. Since alcohol is involved, a hired (and sober) driver is in charge of steering drinkers to bars and breweries in the area. State law requires that each city or town determine what commercial megacycles can operate in its jurisdiction.

Brittany Orlando, owner of Sip-N-Cycle Cruises, presented a proposed ordinance for pedal pubs in downtown Sarasota. Sip-N-Cycle Cruises began as a pedal boat company on Siesta Key in 2017. She received city and county approval to introduce a pedal pub extension, or “land cruise,” in 2018.

“Now that I have a proven track record,” Orlando said at the meeting, “I wanted to come back to the city and re-address the topic, to see if this is something that would do well in downtown Sarasota.” Orlando spoke about the benefits of a pedal pub business to a city’s economy, referencing a report from Nashville mayor Megan Barry, who cited pedal pubs as a factor in the $21 million revenue the city generated in 2018.

Sarasota Commissioners were understandably concerned about safety, including open-carry laws and noise ordinances.

“The devil is in the details,” vice mayor Jen Ahearn-Koch said during the meeting. “My two worries are the music and the late hours of operation.”

And there have been some serious accidents. In August 2013, a pedal pub carrying 10 riders in downtown Minneapolis tipped over. The accident sent two of the pedalers to the hospital; one was later pronounced dead. Two years later, in the same city, three riders were seriously injured when a pedal pub was rear-ended.

According to Sarasota regulations, all non-motorized vehicles must be equipped with seat belts, tires proportionate to the vehicle, and a horn for signaling. Pedal pub companies commonly maintain a strict drink possibly for riders. During the meeting, the possibility of a year-long pilot program was also discussed.

Orlando proposed a 2.1-mile circuitous route for the pedal pubs that would include Mandeville Beer Garden to the north and Ringling Boulevard to the south. Other potential stops along the way would include O’Leary’s Tiki Bar & Grill and 99 Bottles. Stay tuned for more info next month.

Whether you choose a cruise by land or by sea, bring aboard your favorite beverages & snacks, crank your tunes, Sip, Cycle, and Socialize on a unique excursion unlike anything else.

Your information will never be shared with 3rd parties.